Today, I woke up to the news that actress and model Cicely Tyson, one of 25 women Black women honored for their contributions to art, entertainment, and civil rights has passed at age 96. Cicely Tyson set the highest example for herself, and was commonly associated with the portrayal of strong, African-American women. She has taught African-American women across the country about the importance of embracing natural beauty. As a professional model and public figure, she showed up for interviews with her natural hair, something that was rarely to never done on live television at the time. Cicely Tyson was not afraid to express her true self to the world, and that is something that has inspired the way I carry myself. I will never be apologetic for being myself, and that is a quality she carried with grace. Cicely and many others have had a profound impact on my view on life, and it is important to acknowledge those who we have lost in the past year. 2020 was a difficult year for everyone, and those we lost have paved the way for the black community, and should not be forgotten. She will be dearly missed.

This past year, we have lost major pillars of the black community. These figures have paved the way for upcoming actors, performers, and athletes. This past August, we lost actor Chadwick Boseman, whose death posed a major shock to everyone. He brought enormous amounts of strength and dignity to the role of “Black Panther”, a profound film that inspires us as a black community. In the movie, he depicts a world leader, delivering a strong message to the black community that black is beautiful and powerful. He also portrayed the famous baseball player Jackie Robinson in 42, a film that helped me to reinforce the idea upon myself that I can achieve anything regardless of the challenges I may face along the way. Tommy Lister, known as “Deebo” in the TV comedy Fridays marks another hard loss faced last year. His role in television has been a staple in many childhood memories. The laughs and smiles he provided will always stick with me when I think of his life.

While these losses have been difficult for us all, their life and legacy has paved the way for new, upcoming generations of talent. Names such as Lupita Nyong’o, Daniel Kaluuya, and John David Washington are just some of the names of black actors who will carry the torch in 2020s. These young and upcoming actors are putting use to their platform to make a change for the better in the black community. I feel inspired by such a young group making a tremendous difference, and I think it shows us that we all can make a change regardless of what we think our place in society might look like.

With those lost in 2020, some of these figures have come from the San Diego community, and leave their mark on the place we call home. Of these includes Arnie Robinson, a world renowned olympic athlete and a top-ranked long jumper. He showed me what it means to give back to your community, returning to San Diego after the end of his Olympic career to coach athletes in the area. Kevin Robinson is another San Diego native lost in 2020. He was responsible for many development projects in the community, uplifting the area through his work. Kevin showed what it meant to be a good father, an amazing husband, and serve as a role model for me and the way I treat others. Prevalent Black Figures in the entertainment and sports industry have created a culture full of empowerment, inspiration, and have successfully impacted communities all over the nation.

As the past year has been challenging for many, it is important to remember those who we have lost. The CSDBCC is working to recognize prevalent black San Diegan that we have lost during this past year. These figures represent pillars in the community, defining San Diego as a whole.

Born in San Diego 1948 Arnie Robinson was a world renowned olympic athlete and a top-ranked long jumper. As a San Diego native, Arnie Robinson provided for his community, as an athlete at San Diego State University and later coaching at Mesa Community College. During his career in track and field, he won the gold medal at the 1976 Olympics and Montreal, and continued on to win a bronze medal at the Munich Olympics in 1972. As a lifelong San Diego Resident, Arnie Robinson served as a community role model and inspiration up until his death resulting from Covid-19 complications in 2020. His son Paul confirmed his death on December 1, where he died at his home in San Diego at 72 years old.

Born in 1964, Kevin and his family relocated to San Diego from Chicago when he was only three years old. Growing up, he attended Santa Sophia Academy and Marian High School where he became well versed in the sports of football and baseball. He excelled in these sports, continuing his career at USIU. He graduated with a Bachelor of Arts degree, and signed to play professional baseball with the St. Louis Cardinals. His athletic career however, was cut short by an injury. His career led him to become a broker in family real estate, where he managed and developed several projects in San Diego. Kevin was a beloved member of the San Diego community, showing what it means to be a good husband and father. At the age of 56, Kevin was laid to rest on November 11, 2020, surrounded by family and friends.

We had an amazing opening panel for the MLK Business Clinic!

The Chamber, in partnership with Access 2 Jobs, Asian Business Association, San Diego County Hispanic Chamber of Commerce and other community orgs, celebrated this MLK Day and National Day of Service with a successful community business clinic attended by over eighty people. This was a great event where attendees were able to gain useful insight on how to grow their business in the new year, and network with others while doing so. The day began with a virtual breakfast panel that discussed strategies on how to accomplish diversity in the workplace, and had open discussion on challenges to doing so. Later, the event offered a series of workshops followed by a one-on-one speed networking session that allowed attendees the opportunity to connect with others for future collaboration.

In addition to our partners, the event could not have taken place without the help of the Chamber team; Community Manager Danielle Stephen, Administration Manager Tekly Berhe, Outreach Coordinator Mckenna O’Neill, and Communications Manager L.J. Maull. Elizabeth Cotton, Executive Director of the Chamber, remarked that the event, “Was an excellent start to the new year and a perfect way to honor the late Dr. King’s legacy. I thank all of our partners and the wonderful team at the Chamber for putting this together.” 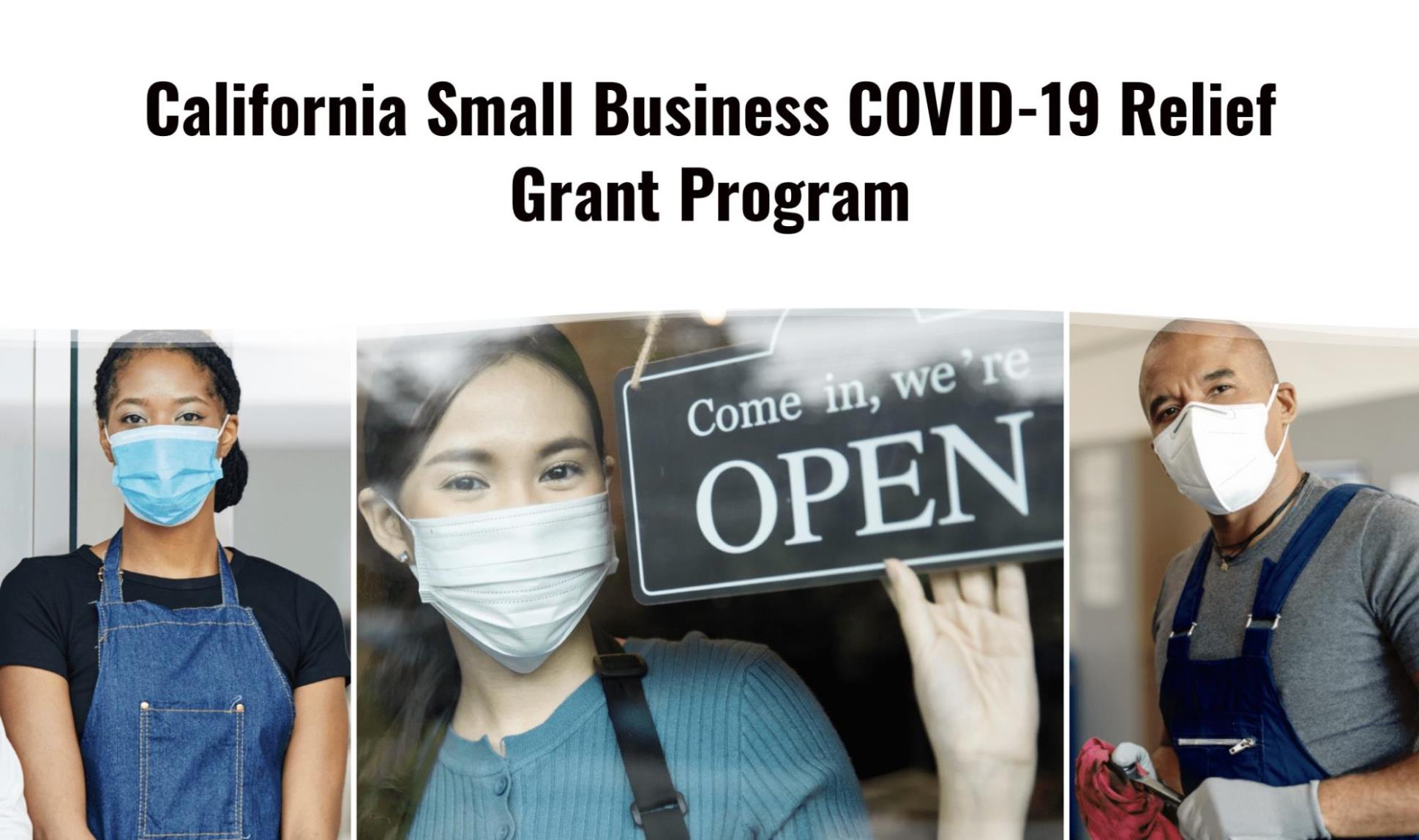 As a partner of the San Diego & Imperial SBDC Network, we are here to help make sure you can complete your application for the California Relief Grant. There are recorded webinars and live webinars, available in English, Spanish, and other languages too. Visit https://www.sdivsbdc.org/california-relief-grant/ [sdivsbdc.org] to learn more and to sign up for a live or recorded webinar!

These are all the webinars that are coming up, including recorded webinars as well.

We also have recorded webinars (on-demand)

If you would like more information on any of the individual events, please go to our calendar.

The California Office of the Small Business Advocate (CalOSBA) is administering the $500 million grant program. On November 30th, the Governor and the Legislature approved assistance for grants ranging from $5,0000 up to $25,000 for eligible small businesses and nonprofits impacted by COVID-19.

Business Bytes is back at Quad AleHouse on May 24th! This month’s event features international speaker and author, Professor Starla Lewis, who will be sharing “Steps to a Purpose-driven Life.“

The event is FREE for CSDBCC members // $20 for non-members.
Get your tickets at the door or in advance

Bring a friend and help spread the word! Visit our event page for more details.

On Thursday, March 23, 2017, the Central San Diego Black Chamber of Commerce (CSDBCC) hosted a celebration of Racquel Vasquez, the new Mayor of the City of Lemon Grove, at the University Club Atop Symphony Towers in Downtown San Diego. At this special event, over 50 Chamber members, business owners, and community leaders joined CSDBCC in honoring Mayor Vasquez for her trailblazing leadership as the first African American woman to serve as Mayor in San Diego County.

As a civically engaged resident of Lemon Grove since 2001, Mayor Vasquez served as a Planning Commissioner and as a member of the City Council prior to replacing former Mayor Mary Sessom, who led the city of Lemon Grove for the past 20 years. Upon accepting her award from CSDBCC, Mayor Vasquez shared the inspiration behind her historic run, and thanked her supporters for contributing to the tireless grassroots campaign that led her to victory in November 2016. The Mayor also shared her optimistic vision for Lemon Grove, a geographically small city with an exceptionally diverse population of 25,000, as a place of opportunity, innovation, and inclusion. Through collaboration with community partners such as CSDBCC, Mayor Vasquez aims to improve the quality of life in Lemon Grove and secure equal access to the resources and opportunities necessary for all its citizens to thrive.

In regards to the celebration, Mayor Vasquez remarked, “This event has far exceeded anything I could imagine.” As one of many celebration attendees who presented Mayor Vasquez with statements of enthusiastic support for her leadership and dedication, CSDBCC President and CEO, Dr. Steven Jones, stated, “We are excited to honor Mayor Vasquez, whose leadership and passion exemplifies and aligns with our mission. The Black Chamber looks forward to supporting the Mayor as we work towards our shared goals, which include advancing inclusive economic development and equal opportunity here in San Diego.”

CSDBCC Chairman Bruce Mayberry, who served as master of ceremonies for the event, added, “As part of our 2017 Six-Step Growth Strategy, Chamber leaders have been working hard to strengthen our community partnerships and engage in political advocacy that supports the success of our growing membership base. This phenomenal celebration of Mayor Vasquez is a special highlight in our ongoing efforts to expand the exposure and impact of the Black Chamber throughout San Diego County.”

CSDBCC is a 501(c) nonprofit organization whose mission is to create generational wealth through business enterprise, education, employment, and investments. For more information on membership and ways to get involved, visit www.sdblackchamber.org or call 619-269-9400.